To share your memory on the wall of Annette Brister, sign in using one of the following options:

Annette was born on March 13,1930 in Abilene, Texas as the beloved only child of Homer Hart Scott and Mattie Murph... Read More
Annette Scott Brister, 90, of Waco, died peacefully on Thursday, July 30 in her residence at Arbor House Assisted Living.

Annette was born on March 13,1930 in Abilene, Texas as the beloved only child of Homer Hart Scott and Mattie Murphy Scott (Pat). She graduated from Abilene High School and earned her bachelor’s degree from Baylor University.

Annette married Miller Robbins Brister of Burleson, TX in 1950 and they raised 5 children together. Once all the children were school age, Annette returned to Baylor and earned a Master’s degree in Education.
Her 40-year-long career in education began as an English teacher at University High School in 1968. Due to her deep interest in developing students’ academic and social skills, Annette became a counselor, serving young people at South, University, and Lake Air Junior High Schools, and Midway and Reicher High Schools. Through the Region 12 Education Service Center, Annette also counseled students in surrounding communities including Buckholts, Jonesboro, Hubbard, Hallsburg, Mt. Calm and Penelope.

Annette was an active member of Lake Shore Baptist Church for more than 50 years, where she was a deacon and the driving force behind the congregation’s food ministries, particularly the food pantry. Until just a few months ago, she continued volunteering at the food pantry after it moved to Carver Park Baptist Church. Annette ministered in many ways through Lake Shore, raising funds to support the Song for Shalom Children's Center (Ghana) and participating in mission trips to New York, New Orleans, San Francisco and El Salvador. She practiced contemplative prayer and studied the teachings of Thomas Merton, Henri Nouwen, and Richard Rohr. Retreats at Laity Lodge in Leakey and the Christ in the Desert Monastery in New Mexico grounded her life of activism and justice.

She developed relationships with non-profits in the Waco community and particularly loved her work with Habitat for Humanity. For over a decade, she spent countless hours providing hands-on labor for building projects (even with roofing, until her doctor advised her against it at age 75) and assisting with administrative tasks in the office.

Annette loved travel and the outdoors. While her children were young, most school vacations were spent on the road throughout the state and country, camping in the family’s travel trailer in various national parks along the way. Later in life, she became an active backpacker, spending many nights under the stars in Colorado, New Mexico, and Arizona with friends in the Waco Outing Club. Never one to say no to an adventure, she even took a hot air balloon ride with family members at age 85.

She truly loved her children and grandchildren and would often travel with them throughout the US and Europe. Throughout her life, a favorite destination was the Texas Hill Country and she loved stopping in Stonewall on the way to enjoy a scoop of ice cream with fresh peaches on top.

Annette found great fellowship in the dear friends she made through regular meetings with her prayer group and outings with her wine club. She also loved the constant companionship of her cats Molly and Callie, to whom she could never say “no.”

May Annette, who worked so hard on this earth for the things she believed God called her to do – the things to which she gave her passion, her energy, her whole heart, her whole mind – rest in God's peace.

Due to COVID-19 concerns, only a private family funeral will be held.

In lieu of flowers, the family requests that memorial gifts may be made to Lake Shore Baptist Church in Waco or to the Shalom Childrens Center in Ghana (www.songforshalom.org).
Read Less

To send flowers to the family or plant a tree in memory of Annette Scott Brister, please visit our Heartfelt Sympathies Store.

Receive notifications about information and event scheduling for Annette

We encourage you to share your most beloved memories of Annette here, so that the family and other loved ones can always see it. You can upload cherished photographs, or share your favorite stories, and can even comment on those shared by others.

Posted Aug 05, 2020 at 07:28pm
I had Mrs. Brister as my English teacher at University High (Back in the good-ole-days). She was such a wonderful teacher! You could tell she truly enjoyed teaching! She was so kind and such a beautiful person, not only on the outside but on the inside too. May God comfort your family during this time of loss.
Martha Pryor Holt, Class of 1970
Comment Share
Share via:
MP

Posted Aug 05, 2020 at 03:47pm
My brother Maxey and I send our heartfelt condolences. Annette was a great friend to our mother Emmy Parrish. She called and visited Mom at home, in the hospital, and in nursing and rehab facilities as much or more than any other friend. Mom was always delighted to see Annette and spent many hours talking, praying, and sharing memories of their many activities over the years, including the Outing Club. We'll always be grateful.
Comment Share
Share via:
KA

Posted Aug 05, 2020 at 02:41pm
Gayle and I have known your mom for 50 years at Lake Shore Baptist. She was always working for the church - volunteer, cook, helper, visitor - you name it, she probably did it! We also knew her through the Outing Club. We had some really great times around camp fires sharing stories. We loved her. We will miss her. We are so sorry she is gone. But we know she is with the Lord. Peace and grace to you all. Kay and Gayle Avant
Comment Share
Share via:
DB

Posted Aug 05, 2020 at 11:20am
I treasure the memories of your Mother as "table mate" at the Arbor House. Our shared times were often enhanced by the pleasure of meeting some of her children as they came to visit. It was a privilege to know your Mother. God bless and comfort you in your great loss.
Darlene Beghtel
Comment Share
Share via:
PW

Posted Aug 05, 2020 at 06:49am
We send our condolences to the Brister family members. Mike and I were so sorry to hear of Annette's death. She was one of the most vibrant people I have ever met. I remember going snowshoeing with her in Colorado when she was in her 70' or so! Both Mike and I held her in fond regard and know that she will be sorely missed. She lived a good, long life and was blessed by God with wonderful children, many friends and grandchildren. Our hearts and prayers are with you all in this time of grieving.
Comment Share
Share via: 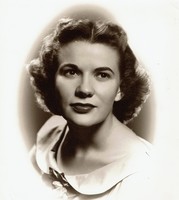