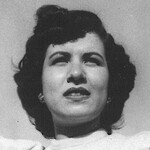 Yolanda Galindo Krell of Waco, Texas, passed away on December 10, 2020, at the age of 92. She was born in El Paso, Texas, to parents Ignacio and Isis Galindo. The family lived in Silver City, NM, and El Paso.

As a young woman Yolanda moved to California and lived at the Studio Club, a performing arts sorority in Hollywood. She married Glenn Krell in 1950 and raised a family of four children in West Los Angeles.

Yolanda played piano and loved classical music, especially concerts and shows at the Hollywood Bowl. She worked as a music librarian at KFAC-FM, a classical music radio station in Los Angeles. She worked in patient admissions at UCLA hospital, and following her retirement, became a hospital volunteer.

She is survived by her four children and five grandchildren.

The family would like to give our deepest thanks to the caring and kind staff at Stoney Brook of Hewitt.

There is no public memorial scheduled at this time.