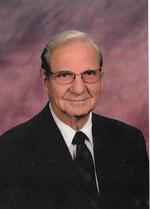 The funeral service is on Saturday, November 23 at 1 pm at First Methodist Downtown, 1300 Austin Avenue (formerly Austin Avenue Methodist Church) with Reverend Tim Jarrell of Waco officiating. Visitation is on Friday, November 22 from 6 to 8 pm at Oakcrest Funeral Home, 4520 Bosque Blvd, Waco. Burial will be at Aurora Cemetery, Aurora, Texas.

Walter was born in Fort Wayne, Indiana on January 8, 1920. His father, Leslie worked for a truck manufacturer and his mother, Pearl was a housewife. He graduated from Central High School in Fort Wayne and attended Evansville College for two years, graduating from Purdue University in Mechanical and Aeronautical Engineering. He later received a MBA from Texas Christian University.

Walt worked as an engineer for Boeing in Seattle, Bendix in New Jersey and General Dynamics in Waco. He retired as Program Chairman for the Mechanical Technology department in what is now the Waco campus of Texas State Technical College in 1985.

He was past president of the Society of Mechanical Engineers and SCORE (Service Corp. of Retired Executives).

He was an excellent bridge player who enjoyed winning his Silver and Ruby Life Masters Degrees at age 94.

Walt was an active member of Austin Avenue Methodist Church for 50 years.

He was preceded in death by his father, Leslie Winters; mother, Pearl Winters; brothers, Paul and Wayne Winters of Fort Wayne, Indiana and his wife of 64 years, Carolyn Ellis Winters.

Walt is survived by his son; Dan Winters and wife, Lori of Colleyville, Texas and their four sons; Matthew, Michael, Sam and Tim Winters; daughter, Katherine Wolf and husband, Rob of Houston and their daughter, Samantha Wolf of Chicago.

The family would like to thank Pastor Tim Jarrell and Dr. Darrell Pietsch M.D. for their kind attention to dad.