To share your memory on the wall of Stuart Rosenbaum, sign in using one of the following options:

Stuart was born on August 15, 1943, in Indianapolis, Indiana, along with his twin brother, Stephen. He spent many summers as a boy with his grandparents on their farm in Indiana. These were transformative experiences for him. He loved the satisfaction of accomplishing hard work together; the supportive community; and relaxing on a blanket in the yard in the evening, enjoying a cola with his grandfather.

Stuart taught for nearly 40 years at Baylor, focusing on American philosophy, especially the work of John Dewey and William James. For many years, he was Director of Baylor's graduate program in philosophy, and he was the key figure in designing its PhD program. Stuart served multiple terms on the Faculty Senate and twice earned Baylor’s Outstanding Faculty Member Award. He also led Baylor’s summer program at Oxford for a number of years. He touched countless lives through his teaching. Stuart officially retired from the Department of Philosophy in 2019, but he continued to write and correspond with professional colleagues about the ideas in his scholarly writing. He was enormously productive during his later years, recently writing three books: Pragmatism and the Reflective Life (2009); Recovering Integrity: Moral Thought in American Pragmatism (2015); and Race, Justice, and American Intellectual Traditions (2018).

He was preceded in death by parents, Earl and Dorothy Rosenbaum. He is survived by daughter, Melissa; son, Michael and spouse, Sarah; daughter, Sarah; son, David; grandchildren, Caleb, Carson, Evan, and Guthrie; and brother, Stephen and spouse, Joan.

Stuart was deeply devoted to his children and grandchildren, and they celebrate his influence on their lives. He inspired in them a love of nature and a recognition of spirit in all forms. His presence fostered an appreciation of language, poetry, and music and encouraged curiosity, inquiry, and pursuit of knowledge. Stuart’s gentle, patient, and generous nature -- and, most of all, his unconditional love -- gave them a strong foundation to follow their passions and thrive as unique individuals. He provided them with a deep appreciation of the human condition and the spiritual value of community.
Stuart’s words will continue to support, guide, and inspire us:
“Breathe Deep and Seek Peace.” “It’s Wonderful.”

The family would like to establish an endowed memorial fund in Stuart’s name, at Baylor. If you would like to contribute to this fund, more information will be available at the time of the virtual memorial service.
Additionally, gifts may be made in Stuart’s honor to The LivLyme Foundation (www.livlymefoundation.org) and to the Sierra Club (www.sierraclub.org).
Read Less

To send flowers to the family or plant a tree in memory of Stuart Rosenbaum, please visit our Heartfelt Sympathies Store.

Receive notifications about information and event scheduling for Stuart

There are no events scheduled. You can still show your support by sending flowers directly to the family, or planting a memorial tree in memory of Stuart Rosenbaum.
Visit the Heartfelt Sympathies Store

We encourage you to share your most beloved memories of Stuart here, so that the family and other loved ones can always see it. You can upload cherished photographs, or share your favorite stories, and can even comment on those shared by others.

Posted Jan 10, 2021 at 05:55pm
Over the last several years, Stuart became the go-to "philosophical resource" for our Sunday school class at Lake Shore Baptist Church. I lead the discussions in that class, but he gave me countless insights into various American and classical philosophers who came up in those conversations. He was also on my deacon ministry care list this past year. In that capacity, I drove out to his house the weekend after Thanksgiving to personally deliver our traditional Advent booklet. After I left his at the front door and then rang the doorbell, Stuart came out and we had a good but socially-distanced talk. He told me that his brother had just left Waco after a wonderful Thanksgiving visit. The last thing we did was to laugh in agreement that it would be great when our class could all be back together in person once the Covid-19 pandemic was under control. He was obviously in good spirits. Of course, I had no idea that he would be gone in only a short time. I am so thankful for the gift of his friendship, and I want his family to know what a blessing Stuart's presence was in the fellowship of our church.
Comment Share
Share via:
MO

Posted Jan 04, 2021 at 02:05am
I’m so sad to hear of the passing of Dr. Rosenbaum. He was a wonderful teacher and great contributor to Baylor. We were so fortunate to be able to learn from him and benefit from his kindness and experience. Prayers for his family and friends during this time.
Comment Share
Share via:
KL

Posted Dec 21, 2020 at 11:28am
Stuart was my best friend. He was best man in our wedding. From freshman year at Baylor to the present, we shared 60 years of experiences and created countless memories together. For the past decade and a half we have been close enough for regular long weekends together. Stuart was with us twelve days before he died, and he planned to come back the weekend of his death. Stuart was my philosophical compass. In the recent past we were doing some serious philosophy together, exploring Bryan Magee's Ultimate Questions and David Bohm's Wholeness and the Implicate Order, among others. For several years now he has brought me to a a much greater understanding of and appreciation for the works of William James and John Dewey. Stuart was sending me chapters of the book he was currently writing as he finished them. I am who I am in many ways because of Stuart. To my mind Stuart was a professor of philosophy in the grand tradition of Baylor's "Golden Era" of philosophy, along with people such as Jack Kilgore, Hayward Shuffard, Bill Toland, Elmer Duncan, Bob Baird, and Bill Cooper. I shall miss his tutelage enormously. But just as much as I shall miss our long walks in the woods together, our juvenile banter that entertained Marsha, our sharing with each other all of the ups and downs and thoughts and feelings that are the stuff of life. Among my favorite memories of Stuart is our fly fishing trip to New Zealand in 2020 along with his twin brother, Steve. Stuart will always occupy a special place in my storehouse of good memories. As I used to say to him, "I love you, man!"

Posted Dec 20, 2020 at 10:40am
Sandy and I join Stuart’s many friends in offering our heartfelt condolences to his remarkable children—David and Sarah, and Melissa and Michael—and to all of his family members. In so many ways I felt more like a brother to Stuart than a close friend. Philosophically, socially, politically, and spiritually we were kindred spirits. When we discussed issues and if he felt I was off-base, Stuart would never hit me over the head with his expert knowledge. Rather he would gently guide me into a new way of seeing with facts and sound reasoning. He was that most rare combination of scholar and mystic, a teacher of deep wisdom who guided so many to a life rich with beauty, compassion, humility, love, and joy. Love and miss you, Brother!!
Comment Share
Share via:

Posted Dec 19, 2020 at 08:15pm
I remember Stuart from 60 years ago as a classmate of mine. He was friendly, smart, well known and well liked. I consider myself so lucky to have reconnected with Stuart in recent years. During the pandemic, I drove south and Stuart drove north and we met at the Texas Department of Transportation rest stop in Hillsboro for lunch and conversation. We had “our table” and Stuart brought our lunch and I brought the drinks. We talked about our children, good books, poetry, travel. The last visit he brought a bag full of books for me to read. I have the books and the bag and I will read every one to remind me of him. Dear Stuart, my heart is broken and I will miss you so much
Comment Share
Share via: 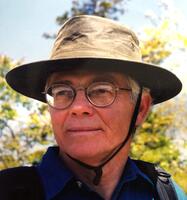