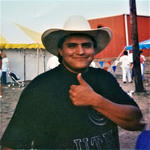 Martin Lee Sauseda, age 51, passed away on Tuesday, May 7, 2019. He was born January 2, 1968 in Temple, Texas to Benito and Enriqueta (Ms. Henri) Sauseda. He was a 1986 graduate of his hometown high school, Bruceville-Eddy, where he and the Varsity football team won the North Zone Championship his senior year. He continued his education at McLennan Community College where he earned his associate’s degree in business administration. He utilized his degree to help his father continue the family business, Cen-Tex Heat and Air. He enjoyed time spent with friends and family, drinking Miller Lite and singing karaoke.

Martin is preceded in death by his father, Benito Sauseda. Left to honor and remember him are his mother, Enriqueta Sauseda; his children, Marcus (Victoria) Sauseda, Marissa Sauseda, and Marshall Sauseda; his sister, JoAnne (Darrell) Sharp and her daughters, Elaina and Erica; and many cousins and other family.

In lieu of flowers, the family requests donations be made to VFW Temple, Bruceville-Eddy United Methodist Church, and the Temple McLane Children’s Medical Center in honor of Martin.