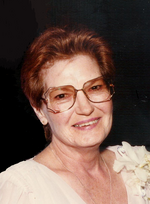 Jean Biddle Phillips was born in Waco Texas on September 21, 1929 and left us all too soon on February 28, 2021. While short in stature, she was big in heart and true to her red hair, could be quite a spitfire. I’m often told what a sweet woman my mother was, which is true; but my thoughts immediately flash to that spunky woman that yelled tirelessly for the Baylor Women’s Basketball team and cheered on the Dallas Cowboys while trying to help the coaching staff from our living room couch. She loved Kitok’s hamburgers and oriental fries, Case de Castillo and Margaritas, Poppa Rollo’s pizza and none of us could go to visit without a trip to Shipley’s for her favorite donuts or even better – West kolaches.

She survived diphtheria as a child, graduated early from Waco High School – having skipped a grade, and was working in one of the top floors of the Amicable (ALICO) building in downtown Waco during
the F5 tornado of 1953. It was 1952 when she met and soon married John Lloyd Phillips. They later moved to Austin following his discharge from the Air Force; he attended the University of Texas and she was active in the Alpha Phi Chapter of Beta Sigma Phi. They loved Big Band and Jazz music, Frank Sinatra and dancing! In 1961, John and Jean adopted a baby girl, just 5 days old, and named her Gina Marie. A devoted wife and mother, she waited until I was in high school to pursue her desire to further her education, attending McLennan Community College and ultimately teaching there for over eighteen years in the computer data processing department.

She loved to garden, even if the plants didn’t always cooperate. She loved to go bowling, watch old
movies and spending time with friends. Her mornings always started with black coffee and frequently
the crossword puzzles in the paper. A member of St. Alban’s Episcopal Church since the 1960s, she
loved to sing even when it made her lose her voice (allergies), something we always teased her about.
She loved watching Gina grow up in St. Alban’s School. Her youngest grandson Ryan Sweeney was
baptized there and she was incredibly proud that both he and his brother Sean Sweeney were active in
Sunday School as well as serving as altar boys.

The greatest joys in her life were her family, friends and Cowboy football – (I’m pretty sure the entire
neighborhood already knew that last part though). She and Lucille Castillo were in high school when
their incredible friendship of over 70 years began. Mom always told me that she was blessed to have
married her best friend – her “buddy” – and they were inseparable for over 64 years until we lost Daddy
in 2016. She was honest, sometimes to a fault – but through it all she taught me what unconditional
love and devotion looked like, the value of hard work and determination, the importance of integrity,
the confidence to have courage and the indelible bond between a parent and child or grandchildren or
great-grandchildren… she loved us all, and we will miss her dearly.

A service of remembrance will be at 2:00 p.m. Sunday March 28 th , at St. Alban’s Episcopal Church, with
burial to follow at Waco Memorial Park. Visitation will be at OakCrest Funeral Home Saturday March
27th from 10-5 p.m. Memorial donations may be made to either St. Alban’s or McLennan Community College.