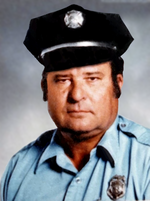 Harold Eugene Meadors, 84, of Mart, Texas, passed away Monday, March 8, 2021 at Baylor Scott & White Hillcrest hospital. The youngest of 12 children, Harold was born March 22, 1936 in Elk, Texas to Henry and Martha (Huntsinger) Meadors. Harold later moved to Waco, graduating from University High School. After high school, Harold joined the U.S. Army where he served as a cook for six years in the Texas Army National Guard.

Early in life, Harold worked as a mechanic at Gordon Rountree Cadillac-Oldsmobile. He then began his career with the Waco Fire Department in 1957 as a mechanic and worked his way up to become a front-line firefighter a year later. Harold served as a Pipeman (firefighter), a Tillerman (driving the back of the ladder truck at the Old Station 1), and an Engineer, driving and operating fire engines and ladder trucks out of most of the stations in the City of Waco. Harold loved telling stories and shared that there was a “race” of sorts involved when called to a fire. He prided himself on being able to arrive to a fire before all the other engines. In 1992, after 35 years of service, he made way for the next generation of firefighters and retired from the Waco Fire Department. Harold also owned his own home improvement business for many years.

Harold accepted Jesus Christ as his Lord and Savior in 1972. His devotion to Christ became the driving force in all that he did in life including his service and dedication as a firefighter. Harold was known as a very giving person, but the goodness that others saw of him, was not of himself but through Christ.
Harold loved his wife, Betty, his family, and God more than anything. He was an avid sports fan and most enjoyed Baylor Lady Bears basketball. Harold loved cooking and from his time cooking in the Army, he did not know how to make a small meal, so he often shared the extras with others. Harold also enjoyed spending time with his beloved dog, Freckles.

The family will hold a private graveside service. In lieu of flowers, donations may be made to a charity of one’s choice.

The family would like to thank the loving staff at Baylor Scott & White Hillcrest for the care provided to Harold during his illness, especially Dr. Elieson and nurses, EJ, Chase, Jennifer and James. They would also like to thank Lindsay, Brian, and Heather from American Medical Response, Trevor from Mart Volunteer Fire Department, Oakcrest Funeral Home, and the Waco Fire Department.