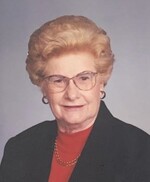 Evelyn Jackson Harkin passed away on December 19, 2020 and went home to her Lord and Savior. Graveside will be at Waco Memorial Park, followed by a reception nearby for friends and family to celebrate Evelyn’s life. Visitation will be at 1 p.m prior to the funeral service.

The service will be livestreamed on the OakCrest Funeral Home Facebook page. Social distancing, temperature checks, and facial covering will be required.

Evelyn was born March 29, 1926 in Gatesville, Texas to John Guy Jackson and Amelia Nadine Coskrey Jackson. She grew up and attended schools in Mosheim, Heidenheimer, Moffat and Temple.

In 1948, Evelyn moved to Waco where she worked for A&P Grocery. In 1950, she married Michael Denis Harkin, Jr. They made their home in Waco where they raised their four children. They were members of Beverly Hills Baptist Church where Evelyn taught 2nd grade Sunday School in her earlier years.

Sewing was her hobby and passion over the years. In later years, some of her greatest enjoyment was visiting old homeplace communities and keeping in touch with family and friends. She received great joy in opening her home to host church showers/parties and various gatherings of family and friends. In her later years, she thoroughly enjoyed watching her great-grandchildren grow up. She will be truly missed by all who knew her.

Evelyn was preceded in death by her husband in 1991; her parents; brothers Billie Guy Jackson and W.T. (PeeWee) Jackson; sister Ruth Hyden, and brother-in-laws Gene Looney and Alfred (Hoss) Hyden.

The funeral service will be held at Oakcrest Funeral Home (Waco) on Monday, December 28, 2020 at 2 pm with Rev. Mark Westerfield officiating. Visitation will be at 1 pm prior to the funeral service. Graveside will be at Waco Memorial Park, followed by a reception nearby for friends and family to celebrate Evelyn’s life.