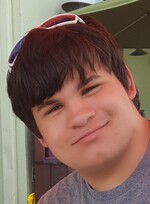 Devin Shon Trujillo, 19, of Waco, passed away Sunday, March 21, 2021. Devin was born August 14, 2001, to Esteven “Steve” Trujillo and Amanda Barton. Devin attended schools in Waco and was working towards obtaining his Associate's degree at MCC. At the time of his passing, he was employed at Dick's Sporting Goods.

Devin was a sensitive and quiet person, always generous and helpful. He enjoyed playing video games with his brother, Jake, and playing board games, especially Monopoly. Devin loved music and traveling. Some of his fondest memories were of the cruises he took with his family and ziplining in Alaska. He loved exploring new places and dreamed of touring Europe one day. Reading about and studying mythology was one of his favorite pastimes.

Devin loved McDonalds and Chick-fil-A and could have eaten their foods at every meal. He drank Big Blue, all the time! Anyone that knew Devin would pick up some Big Blue for him if they ran across it.

He loved spending time with his family, and they adored him and treasured their time spent together. Devin will truly be missed and his memory will be cherished by his parents, Amanda Barton and Jacob Gonzales; his brother, Jacob “Jake” Gonzales; his grandparents, Sandy Barton, Robert Dedeluk, Barbara Horner, Jerry Trujillo, Faustino and Laurie Gonzales (Mr. & Mrs. G); as well as many aunts, uncles, and cousins who dearly loved him.

Devin was preceded in death by his father, Steve in 2003.