To share your memory on the wall of Danny Garces, sign in using one of the following options:

Danny was born March 11, 1942, in Poblacion, Talisay City, Cebu, Philippines, to Ciceron and Elena Garces of Poblacion, Talisay City, Cebu, Philippines. Danny is the eldest in their family with three brothers Edgar, Elmer, Roland, and two sisters, Viola and Melicent. Danny finished his high school in Talisay Malayan Academy, the Philippines, in 1959. Danny was an excellent athlete and champion from the Philippines in boxing, swimming, and weightlifting. He was a finalist for the Mr. Philippines bodybuilding competition in 1968. He also competed in the swimming trials of the 1964 Tokyo Olympic games.

Danny completed a Bachelor of Arts degree, majoring in Political Science in 1966 from the Lyceum of the Philippines, and studied law in the same school until he immigrated to the United States in 1968. Danny voluntarily joined the U.S. Army on July 29, 1969, and deployed to Vietnam from 1969-71.

Upon returning to the U.S., Danny used his G.I. Bill and earned his Bachelor of Laws degree from Chicago La Salle Extension University School of Law in 1976. His primary job in the U.S. Army was Chief Legal Specialist of Military Justice, Staff Judge Advocate Office. The U.S. Army awarded him the Bronze Star Medal in Vietnam, National Defense Service Medal, Vietnam Cross of Gallantry, five Army Commendation Medals for exemplary service in Vietnam and the continental United States. He also earned the Vietnam Counter Offensive Phase VII medal, Expert Marksmanship Badge for the M-14 and M-16 Rifles, three Overseas Service Medals, six Good Conduct Medals, and the Meritorious Service Medal for his outstanding service in charge of various assignments of The Staff Judge Advocate General’s Office stateside and overseas. Danny retired from the U.S. Army after 20 years of dedicated service in the rank of Sergeant First Class.

Danny had extensively traveled all over the world with his beloved wife, Dahlia, for many years. Danny and his wife joined various trips to the Holy Land, Jerusalem, Jordan, Egypt, Africa, Rome, Italy, Greece, Turkey, Spain, Portugal, France, Great Britain, Ireland, China, Japan, Caribbean Islands, Southeast Asia countries, all fifty states, Canada, and Mexico. They traveled by air, land, cruise ship, and train. Danny was devoted to his Lord and involved in many ministries of his church as a 4th degree Sir Knight of the Knights of Columbus Council No. 13005.

Danny was preceded in death by his parents, Ciceron and Elena Garces. He and his beloved wife of 47 years, Dahlia, raised two daughters, Diane Garces Cummings and Debbie Garces Allen, and his nephew, John Paul Gagaza.

Survivors include Danny’s brothers Edgar, Elmer, Roland, and sisters Viola and Melicent G. Seguerra; brother-in-law Alexander V. Tabay and sister-in-law Elma H. Tabay; Debbie’s husband, James Allen, and many nieces, nephews, relatives, and friends in the Philippines and U.S.A. The family invites you to leave a message or memory in the Memorial Guestbook at Oakcrestwaco.com.
Read Less

To send flowers to the family or plant a tree in memory of Danny A. Garces, please visit our Heartfelt Sympathies Store.

Receive notifications about information and event scheduling for Danny

We encourage you to share your most beloved memories of Danny here, so that the family and other loved ones can always see it. You can upload cherished photographs, or share your favorite stories, and can even comment on those shared by others.

Curtis Lerette, Jo Ann & Doug Allen, and other have sent flowers to the family of Danny A. Garces.
Show you care by sending flowers

Posted Sep 28, 2020 at 12:16pm
May you all find comfort in knowing how Mr. Garces served our Lord in his life. You are in my thoughts as you morn a good man the Lord has called home

Posted Sep 28, 2020 at 11:59am
Prayers and Condolence to the Garces Family... Rest In Peace Danny.. Surely everyone will missed you. Thank you for the wonderful memories you left behind. from, Cesar Castanares and Family..
Comment Share
Share via:
HS

Posted Sep 27, 2020 at 01:41pm
Even though the Leaders of the 204th did not know Danny, his character was visible daily in his Daughter. You are in our thoughts during this time.

Flowers were purchased for the family of Danny Garces. Send Flowers

Posted Sep 27, 2020 at 12:27pm
I never met Danny. but i sure wished that I had to be able to shake his hand, pat him on the back and be able to tell him just how much that I appreciated everything that he did, and all of the sacrifices that he made(according to how highly decorated he was)and for fighting for all of us, our freedom, here in the United States!! GOD bless you Danny!! May-You-Rest-In-Peace!! Job-Well-Done!! Thank You Sir!!
Comment Share
Share via:
KB

Posted Sep 27, 2020 at 08:16am
Garces Family, we are so sorry to hear of your loss. We always enjoyed cruising with you and visiting. Our thoughts and prayers go out to you in this difficult time. Allan & Kathy Blahuta
Comment Share
Share via: 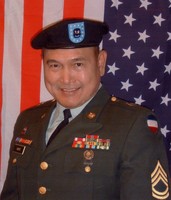 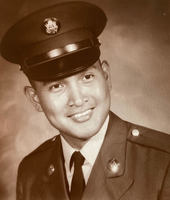