To share your memory on the wall of Clydene Gilmer, sign in using one of the following options:

Print
Clydene Gilmer, 86, died December 13, 2020 at Hillcrest Hospital in Waco. Due to the pandemic, services will be delayed until next year.

Clydene was born in 1934 in Hamilton County, Texas to Stella Price. She was named after her father C... Read More
Clydene Gilmer, 86, died December 13, 2020 at Hillcrest Hospital in Waco. Due to the pandemic, services will be delayed until next year.

Clydene was born in 1934 in Hamilton County, Texas to Stella Price. She was named after her father Clyde Price who died before her birth. She moved to Waco at a young age and resided there for most of her life. A graduate of Waco High in 1951, she married Belvin Gilmer of Gatesville in 1953. While raising two boys, she enrolled in night classes at Baylor and earned her degree in 1970.

Clydene taught mathematics at University High in Waco for most of the next 30 years. She received several honors including the 1990 national co-teacher of the year for The Opportunity Program (TOP) for at-risk students.

Clydene loved people, puzzles, cards, games and Christmas. She was quick to smile and laugh and prone to spontaneous singing and dancing.

She is survived by her son John, grandchildren Jillian and Jackson, daughters-in-law Loise and Maryann, and cousin and lifelong friend Lola Price. She was preceded in death by her husband Belvin and son Mark.

In lieu of flowers, memorials may be made to the Alzheimer’s Foundation of America.
Read Less

To send flowers to the family or plant a tree in memory of Clydene Gilmer, please visit our Heartfelt Sympathies Store.

Receive notifications about information and event scheduling for Clydene

There are no events scheduled. You can still show your support by sending flowers directly to the family, or planting a memorial tree in memory of Clydene Gilmer.
Visit the Heartfelt Sympathies Store

We encourage you to share your most beloved memories of Clydene here, so that the family and other loved ones can always see it. You can upload cherished photographs, or share your favorite stories, and can even comment on those shared by others.

Posted Jan 01, 2021 at 09:12am
Clydene was my cousin, but we were more like sisters. We grew up together and she was with us nearly every summer. Then when she started college she came to Louisiana where I had moved and lived with us there before getting married to her high school sweetheart Belvin Gilmer. I will miss my puzzle buddy and my little sister/cousin very much. She always was trying to make others comfortable and had to stay busy doing something.
Comment Share
Share via:
BM

Posted Dec 27, 2020 at 09:06pm
Mrs. Gilmer was our neighborhood watch dog and our neighborhood candy distributor. All the kids nearby loved to see her waling across the street with her bucket full of candy for everyone to enjoy. We have missed her dearly everyday since she moved to Gatesville. Heaven is a better place with her there! Rest in Peace Mrg. G.

Posted Dec 20, 2020 at 07:00pm
Clydene was a wonderful lady and a dear friend to me, especially after Mark died. I always enjoyed our lunch get-togethers, and it meant a lot to me that she wanted to stay in touch. To John, Loise, Jillian, Jackson, Maryann, and Lola, my deepest sympathies and condolences for the loss of a beloved mother, grandmother, mother-in-law, and friend.
Comment Share
Share via:
LB

Posted Dec 20, 2020 at 02:09pm
I'm sorry for the loss of Mrs. Gilmer. I remember her as my geometry teacher when I was in the 10th grade at Richfield High School in 1972. The previous semester I had another teacher that I simply could not understand and I told my father about it. He spoke with the principal and I was transferred to Mrs. Gilmer's class. I learned more about geometry in 2 weeks from Mrs. Gilmer than I learned from my previous teacher in 6 months!! She was great! Thanks Mrs. Gilmer.
Comment Share
Share via:
DC

Clydene was a second mother to me, she was my second cousin. I would stay with them every long leave weekend from San Marcos nearly for 4 years. She treated me like one of her own and she loved to take me clothes shopping for dresses since she didn't have any girls. She was very special to me and I loved her dearly. I will miss her singing and dancing. Her funny words that she would say when playing "Double Solitaire" like Turkey Snot" when she would miss a play. She loved puzzles, books, games on her tablet and just about anything sweet with chocolate. 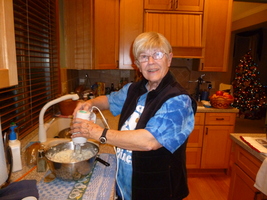 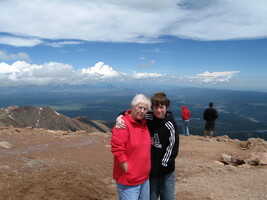