To share your memory on the wall of Brenda Franklin, sign in using one of the following options:

Brenda worked for the Texas Department of Transportation, from where she retired in 2016. Integrity, faith, and family were the important themes of her life. She always said “Right is right and wrong is not right. You can rationalize all you want, but you can’t make wrong, right.”

Brenda loved animals and was an active member of the rescue community for several years. She had numerous rescue pets over the years, but the two who stole her heart were George, the Destroyer Dachshund and Arnold, a senior dachshund. She loved being a “Nina” to her three grandchildren, Noah, Levi and Tommy and was happiest when she was spending time with them. Brenda believed in equality for all and championed the rights of the special needs community. She was a member of Richfield Christian Church and believed steadfastly in God’s grace for all who ask.

Brenda was preceded in death by her husband, Bruce; her son, Jeremey; her sister, Leah Cagle; her grandparents; and many rescue animals.

She is survived by her beloved daughter, Sarah Grace; her grandchildren, Noah, Levi and Tommy; mother, Connie Aycock; and father, Robert Cagle and wife, Martha.

The family respectfully requests that all guests keep the safety of others in mind and please wear a facial covering to the service.
Read Less

To send flowers to the family or plant a tree in memory of Brenda Lynn Franklin (Cagle), please visit our Heartfelt Sympathies Store.

Receive notifications about information and event scheduling for Brenda

We encourage you to share your most beloved memories of Brenda here, so that the family and other loved ones can always see it. You can upload cherished photographs, or share your favorite stories, and can even comment on those shared by others.

Posted Mar 12, 2021 at 02:30pm
Rest in Peace my friend--I will miss your fun personality. Every time I hear Kid Rock, I will always think of you. May God watch over Connie, Sarah, and your grandbabies who you loved so much. Hopefully you and Leah met up and the Cagle girls are guiding us!
Love,
Debbie Bigham
Comment Share
Share via:
BB

Posted Mar 12, 2021 at 09:39am
I will miss Brenda's smile and love for life. Regardless of what she had to endure personally she was always there when anyone needed her. I was married to Brenda's cousin, Byron for which I am so thankful that I got to know her. She and I were very close when we were younger. She even requested Jeremey be put in my care if anything ever happened to her. We never expected the heartache of losing him.
When Brenda and Bruce married I had never seen her so happy and content. Bruce put Brenda on the pedestal she so deserved. Their love was deep and true. I am so glad she had the time with him that she did.
Brenda's love for animals was unmatched by any I have seen. Her heart spilled over with that love.
To the Cagle family and to Connie, this past several weeks has been a tremendous burden for your families. My prayers have been and will continue to be with you and your families.
Comment Share
Share via:
KR

Posted Mar 10, 2021 at 05:53pm
We were very sorry for hear about your loss. Our prayers are with you at this time. May God comfort and hold you close.

Posted Mar 08, 2021 at 10:59am
As many others, I am still in shock. When I would visit Fuzzy Friends, I would sit in her office and we would talk about life and dogs. She messaged me not long ago about a particularly large Great Dane named Valentino, who was a lot to handle. They are both now with each other at the rainbow bridge, watching over all those who miss them. My heart goes out to Sarah and Connie, as well as all the friends that Brenda made her extended family.
Comment Share
Share via:
C

Posted Mar 07, 2021 at 06:37pm
There are simply no words to express my shock and sadness at the news of Brenda's passing. A light has truly gone out in this world.
Brenda was an amazing soul and her strength and integrity were beyond most.
We send much love and sympathy to the family she leaves behind. Our thoughts and prayers are certainly with you.
Godspeed Brenda and thank you for all you did to make this world a better place- for human and animal alike.
I will miss you my long lost elementary school friend.
Carrie and Elinor Pierce
Comment Share
Share via: 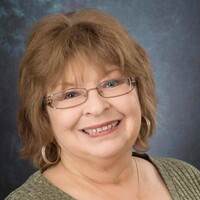 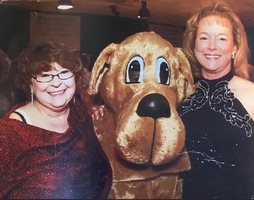 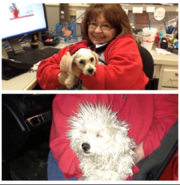 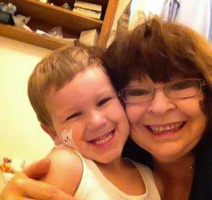