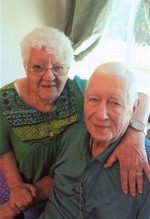 Visitation will be Sunday, March 21 from 5 to 7pm at OakCrest Funeral Home. A graveside service will be 10 am Monday, March 22 at Waco Memorial Park with Brother Wayne Blackshear officiating.

Bill graduated from Waco Technical High School in May of 1951. He married his high school sweetheart, Billie Jean Smith on August 10, 1951. They would have been married 70 years this August. He was inducted in the Army March of 1953 and discharged as Sergeant in March 1955 after serving 16 months in Korea.

The next 50 years were spent in metal fabrication and then structural steel. In his last years he owned his own business.

After retirement he worked in repair of medical equipment and became a wood carver. He was a member of Brazos Valley Wood Carvers.

The family would like to express their heartfelt thanks to Providence Hospice for their loving care.